In an interview published in 2015, Sylvia Wynter concludes her discussion of the history of Western humanism with the suggestion that “humanness is no longer a noun. Being human is a praxis”.[1] This idea of humanness (and non-humanness) as praxis is one that critical posthumanism has embraced on multiple fronts, attempting to deconstruct liberal humanism’s exclusionary binaries with varying degrees of success. In her book Becoming Human: Matter and Meaning in an Antiblack World (NYU Press 2020), Zakiyyah Iman Jackson makes an invaluable intervention into the fields of animal studies, race studies, and critical literary studies, showing how “racialized formations of gender and sexuality are actually central rather than subsidiary to the very human–animal binarism recent scholarship hopes to dislodge”.[2] The present selection first appeared in the introduction to this volume (available for preview on the NYU Press website). It has been adapted for publication in the Genealogy with the permission of the author and the publisher.

While many scholars have critiqued the conflation of black humans with animals found in Enlightenment discourses, many have also fundamentally misrecognized the logic behind the confluence of animality and racialization. Enlightenment thought should not simply be considered from the perspective of black ‘exclusion’ or ‘denied humanity’ but rather as the violent imposition and appropriation – inclusion and recognition – of black(ened) humanity in the interest of plasticizing that very humanity, whereby ‘the animal’ is one but not the only form blackness is thought to encompass. Plasticity is a mode of transmogrification whereby the fleshy being of blackness is experimented with as if it were infinitely malleable lexical and biological matter, such that blackness is produced as sub/super/human at once, a form where form shall not hold: potentially ‘everything and nothing’ at the register of ontology. It is perhaps prior scholarship’s interpretation of this tradition as ‘denied humanity’ that has facilitated a call for greater inclusion, as a corrective to what it deems is a historical exclusion of blackness. One consequence of this orientation is that many scholars have essentially ignored alternative conceptions of being and the nonhuman that have been produced by blackened people.

I pose three arguments to fundamentally reframe the animalization of blackness. First, I argue that philosophers’ and historians’ emphasis on antiblack formulations of African reason and history have overlooked the centrality of gender, sexuality, and maternity in the animalization of blackness. Liberal humanism’s basic unit of analysis, ‘Man’, produces an untenable dichotomy – ‘the human’ versus ‘the animal,’ whereby the black(ened) female is posited as the abyss dividing organic life into ‘human’ or ‘animal’ based on wholly unsound metaphysical premises. I argue that black female flesh persistently functions as the limit case of ‘the human’. This is largely explained by the fact that, historically, the delineation between species has fundamentally hinged on the question of reproduction; in other words, the limit of the human has been determined by how the means and scene of birth are interpreted.

Second, Eurocentric humanism needs blackness as a prop in order to erect whiteness: to define its own limits and to designate humanity as an achievement as well as to give form to the category of ‘the animal’. Current scholarship in posthumanism, animal studies, new materialism, and theories of biopolitics has begun a broad inquiry into the repercussions of defining ‘the human’ in opposition to ‘the animal’. Becoming Human clarifies the terms of the relationship between what Cary Wolfe calls the “discourse of species” and racial discourse by demonstrating that racialized gender and sexuality serve as an essential horizon of possibility for the production of “the animal” as a preoccupation of Modern discourse.[3] At times antiblackness colors nonhuman animal abjection. Anxieties about conquest, slavery, and colonial expansionism provided the historical context for both the emergence of a developmental model of ‘universal humanity’ and a newly consolidated generic ‘animal’ that would be defined in nonhuman and human terms. In this context, discourses on ‘the animal’ and ‘the black’ as well as those on ‘race’ and ‘species’ were conjoined and are now mutually reinforcing narratives in the traveling racializations of the globalizing West. Both science’s and philosophy’s foundational authority articulate black female abjection as a prerequisite of ‘the human’, and this abjection helps give credence to the linear taxonomical or ontological thinking present scholarship is trying to displace. Thus, racialized formations of gender and sexuality are actually central rather than subsidiary to the very human–animal binarism recent scholarship hopes to dislodge.

My third argument is for a decisive break with a commonly held position in the study of race. I do not propose the extension of human recognition as a solution to the bestialization of blackness. Recognition of personhood and humanity does not annul the animalization of blackness. Rather, it reconfigures discourses that have historically bestialized blackness. Forms of human recognition – inclusion in biological conceptions of the human species and the transition from native to universal human subject in law and society – are not at odds with animalization. Thus, animalization is not incompatible with humanization: what is commonly deemed dehumanization is, in the main, more accurately interpreted as the violence of humanization or the burden of inclusion into a racially hierarchized universal humanity. I look beyond recognition as human as the solution to the bestialization of blackness, by drawing out the dissident ontological and materialist thinking in black expressive culture, lingering on modes of being/knowing/feeling that gesture toward the overturning of Man.

Within the structure of much thought on race there is an implicit assumption that the recognition of one as a human being will protect one from (or acts as an insurance policy against) ontologizing violence. Departing from a melancholic attachment to such an ideal, I argue that the violence and terror scholars describe is endemic to the recognition of humanity itself – when that humanity is cast as black. A recognition of black humanity, demonstrated across these pages, is not denied or excluded but weaponized by a conception of ‘the human’ foundationally organized by the idea of a racial telos. For Wynter, the Negro is not so much excluded from the category Man and its overrepresentation of humanity but foundational to it as its antipodal figure, as the nadir of Man. I argue that the recognition of humanity and its suspension act as alibis for each other’s terror, such that the pursuit of human recognition or a compact with ‘the human’ would only plunge one headlong into further terror and domination. Is the black a human being? The answer is hegemonically yes. However, this, in actuality, may be the wrong question as an affirmative offers no assurances. A better question may be: If being recognized as human offers no reprieve from ontologizing dominance and violence, then what might we gain from the rupture of ‘the human’? 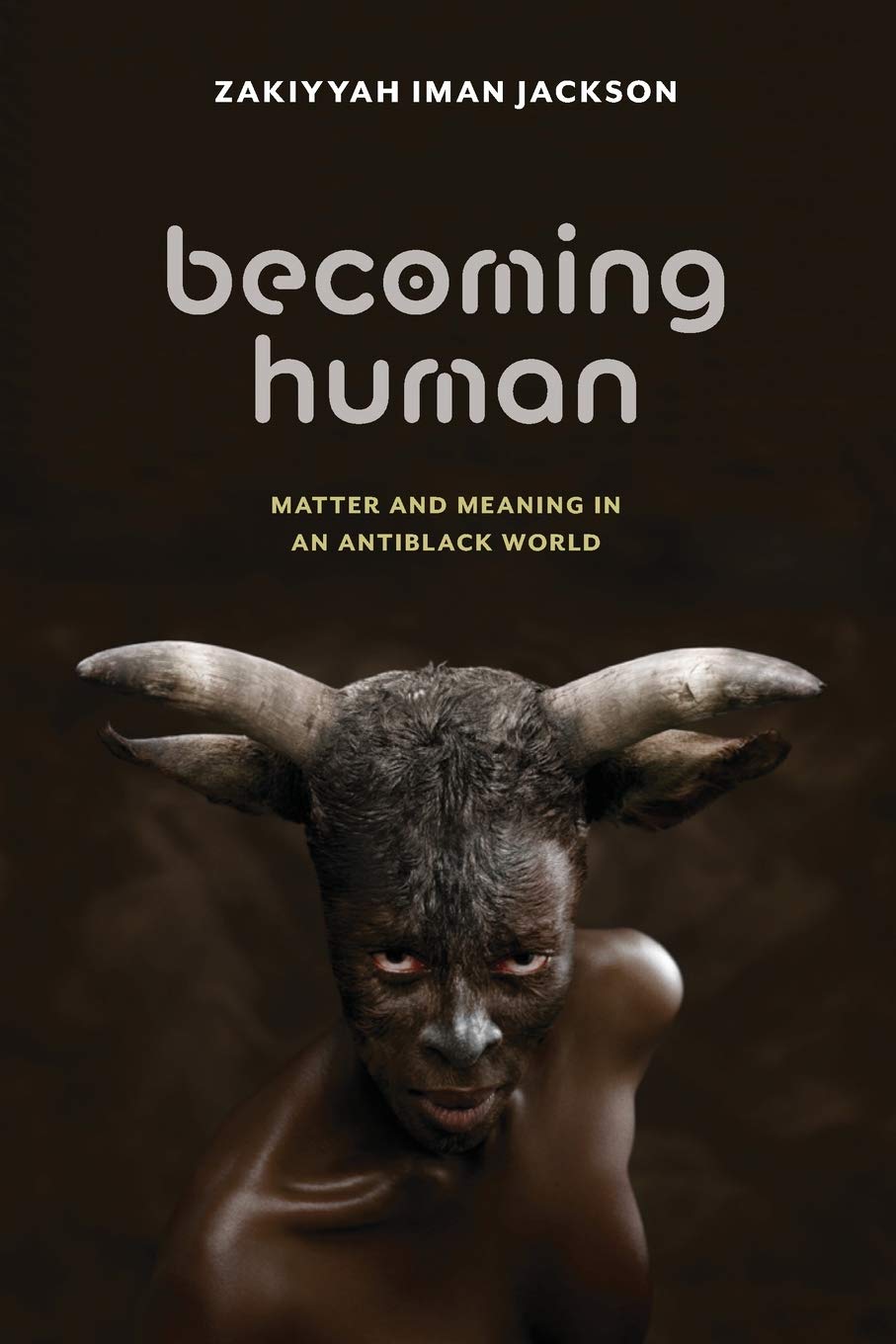 As long as ‘the animal’ remains an intrinsic but abject feature of ‘the human’, black freedom will remain elusive and black lives in peril, as ‘the animal’ and ‘the black’ are not only interdependent representations but also entangled concepts. While there are particular Euroanthropocentric discourses about specific animals, just as there are particular forms of antiblack racialization based on ethnicity, gender, sexuality, and national origin, for instance, these particularizing discourses are in relation to the organizing abstraction of ‘the animal’ as ‘the black’. To disaggregate ‘humanity’ from the production of ‘black humanity’, the one imposed on black(ened) people, assumes one could neutralize blackness and maintain the human’s coherence. But the neutralization of blackness requires the dissolution of discourses on ‘the animal’ and vice versa, but that is, to say the least, unlikely because ‘the animal’ is a mode of being for which Man is at war. What is more plausible is that attempts to neutralize blackness and ‘the animal’ will continue to be in practice, if not word, a means of discipline and eradication.

One thought on “Animality and Blackness”