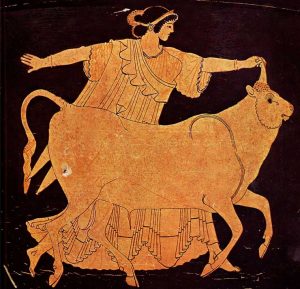 An earlier and longer version of this entry was first published in the European Journal of English Studies; available here.

It might at first glance seem that the phrase ‘European posthumanism’ is a contradiction in terms. Is Europe not that venerable, somewhat ‘nostalgic’ entity or idea that has never been fully realised and that represents the birthplace and archive of humanism? Is Europe’s vocation not tied to the preservation and dignity of human(ist) heritage? In this sense, does the commitment to the ‘European’ project’ exclude or precisely include one’s responsibility to resist the spectre of the ‘posthuman’ and the discourse of ‘posthumanism’?

First of all, why impose nationally or continentally marked boundaries on any idea when it is a safe bet that these boundaries will be (are being) overrun? What motivates this entry is the realisation that it might provide the space in which to articulate a European genealogy of posthumanism that is both recognisable and unstable. For if it is demonstrable and indeed self-evident that there were national and continental determinants to the history of humanism, then it is possible to agree that humanism was, by definition, marked by the contexts in which it found a voice. Examples of these contexts would include Italy or even, more narrowly, Florence in the Renaissance period. By extension, it is hardly extravagant to wonder about the possible European dimensions of posthumanism and the distinct set of bearings that may be encountered there. Admittedly, the world has changed much since humanism’s pre-eminence (independently of the period to which one might wish to ascribe that pre-eminence). In the process we have learnt more keenly that boundaries are plural, traversable and renegotiable. This does not mean, however, that conceptual paradigms are not still linked to place to some degree, or that ideas have grown entirely free of the engendering and nurturing dynamics that arise in particular contexts. That remains the case even as ideas appear to grow increasingly rootless in twenty-first-century thought. It is against this backdrop, and in awareness of its complexities and contradictions, that the prospect of a European (critical) posthumanism is here proposed.

If posthumanism were simply the succession or surpassing of ‘humanism’, it would be utterly resistible. Much that goes by the name of posthumanism is virtually indistinguishable from futurology. A lot of the scenarios that have been painted with the posthuman in mind are either undesirable or indeed quite naive. To a large extent, this discourse appears to be uncritical, hyped-up and techno-utopian. A discussion of the specific and problematic experience of the relationship between modernity, technology and progress is largely absent in overenthusiastic accounts of cyborg consciousness, downloading of minds into computers or becoming code. (These tropes and motifs are being mentioned here because of their recurrence, not to say ubiquity, in transhumanist discourse but also in certain kinds of posthumanist contexts.) In its predominant technologically determinist form, posthumanism appears to have little time for careful analysis, close reading or thinking, in the Heideggerian sense, as an ‘action’ or reasoning in a manner that is not purely technical and instrumental. Too great is the pressure of globalisation, too fast the realtime of new media and information flow, too exciting the transformative potential of technoscience, digitalisation and biotechnology. Hence Europe seems to be implicated in a state of lagging behind, of pastness, of museality. This appears to be more particularly the case given frequent, and never untopical, allegations of Europe’s exhaustion.

Yet Jacques Derrida’s notion of European responsibility may prompt an entirely different reading of Europe: not as conservative or conservational but rather as eminently progressive and, indeed, ‘radical’:

“And what if Europe were this: the opening onto a history for which the changing of the heading, the relation to the other heading or to the other of the heading [l’autre cap], is experienced as always possible? An opening and a non-exclusion for which Europe would in some way be responsible? For which Europe would be, in a constitutive way, this very responsibility? As if the very concept of responsibility were responsible, right up to its emancipation, for a European birth certificate?”[1]

Derrida may in fact be viewed as one of the first and foremost thinkers of a ‘European’ posthumanism. His critical posthumanism is at once ‘responsibly’ European and critical of Europe as a legacy and a horizon. European posthumanism signals the fraught contemplation of Europe as ‘our’ critical tradition in a time of globalisation. This tradition, we contend, has always informed the humanities, in particular literary studies. It enables us to continue posing the questions that have created us, so to speak: What can I know? What ought I to do? What should I hope for? And, last but not least, what does it mean to be human? These questions have been becoming ‘global’ for quite some time, as exemplified in Derrida’s notion of ‘mondialatinisation’ in his essay ‘Demeure’ (Derrida 2000) and Jean-Luc Nancy’s work on the deconstruction of Christianity (Nancy 2006).[2] Thus it should be clear that ‘Europe’ is not meant as a purely geographical entity, or the ‘idea’ of an existing or future community (of nations). ‘Europe’ even goes beyond a political notion of (Kantian) cosmopolitanism. It is mindful of the dangers of ‘Eurocentrism’ at a time when Europe is struggling ‘internally’ and globally to maintain its place or even ensure its survival politically. But it is also mindful of the responsibility of the global European ‘legacy’ and the ‘task of thinking’ that is associated with even a ‘provincialised’ and postcolonial, or postcolonised, Europe. The questions that remain in a supposedly ‘multipolar’ world ‘after’ Eurocentrism has been surmounted remain European because they concern Europe. ‘After humanism’ cannot but mean after a certain kind of Europe, after a certain understanding of the European subject. Posthumanism is thus not just geopolitics or the global economy but also the future of thought. Implicated in that future are the concept of ‘humanity’ and, not least, the future of the humanities – both, in some sense, European ‘inventions’ and conceits. To that extent, posthumanism cannot but be post-European.