Cyberpunk is a subgenre of science fiction which explores posthuman identities primarily through the representation of close relationships between human subjectivity and artificial intelligence or computer hardware.[1] Its influences are wide-ranging with echoes of Raymond Chandler, Thomas Pynchon, and Philip K. Dick among others. The New Wave of science fiction which included Ursula K. Le Guin and J.G. Ballard among others is also a strong influence as such authors use science fiction to examine social, political and philosophical issues. From a historical perspective, cyberpunk is inspired by Cold War paranoia and the proliferation of new (in the 1980s) technologies such as television, recording equipment, and personal computers. 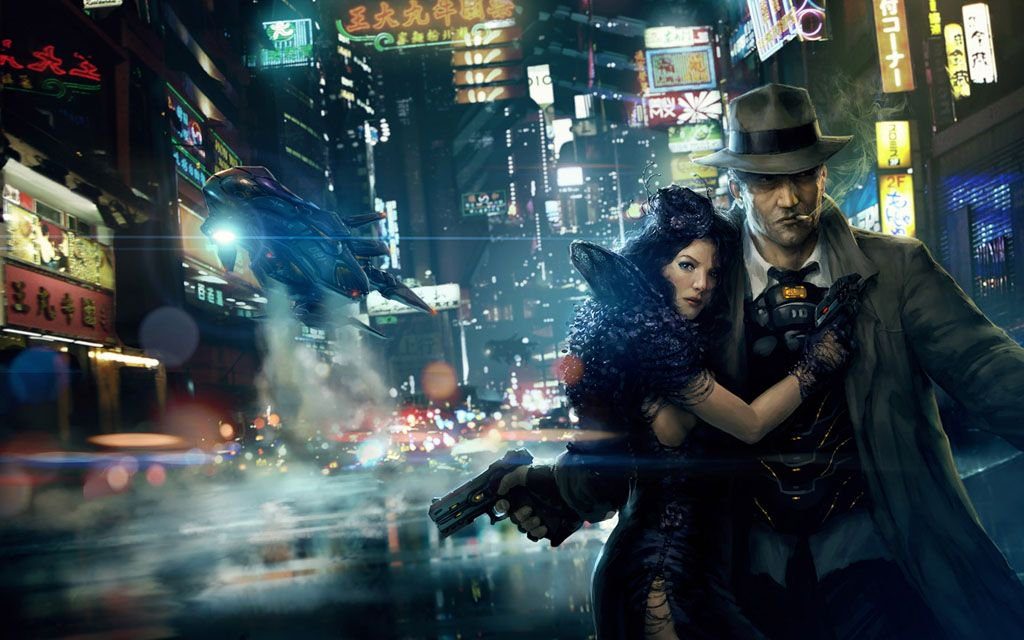 William Gibson is key to the literary movement for his 1984 novel Neuromancer which is seen as the quintessential cyberpunk text. Neuromancer tells the story of a “cowboy” called Case who “jacks in” to his computer in order to commit information crimes in the “matrix”. This involves a physical connection between Case’s brain and the computer hardware which then allows his consciousness to interact seamlessly with the landscape of the matrix. Gibson’s novel introduced the terms “matrix” and “cyberspace” while establishing some of the key concerns of cyberpunk literature and film, which include the consciousness of artificial intelligence, the use of human bodies as computer hardware and the comparison between human consciousness and computer software, a theme that would be taken up by Neal Stephenson in his novel Snow Crash(1992). Mirrorshades: The Cyberpunk Anthology (1986), edited by Bruce Sterling, is also an important milestone as Sterling collected short stories by the most important cyberpunk writers of the time including Gibson, Pat Cadigan, and Greg Bear. In his introduction to the collection Sterling describes the key themes of cyberpunk as, “the theme of body invasion: prosthetic limbs, implanted circuitry, cosmetic surgery, genetic alteration. The even more powerful theme of mind-invasion: brain-computer interfaces, artificial intelligence, neuro-chemistry”.[2] While the literary movement was influenced by longstanding traditions such as hardboiled detective fiction, Kathy Acker brought an experimental style to cyberpunk in Empire of the Senseless (1988), a fragmented, feminist novel that adopts some of the themes of Neuromancer but reworks them to explore a radical, anarchist political agenda. Donna Haraway performs a similar task, but through theory instead of fiction, in “A Cyborg Manifesto” (1991), drawing on depictions of the cyborg in feminist science fiction such as that of Octavia Butler. Haraway claims that “the boundary between science fiction and social reality is an optical illusion”, further emphasising the importance of science fiction and cyberpunk imagery to posthuman theory.[3]

While cyberpunk began as a literary movement it has also become associated with visual culture through the success of Ridley Scott’s Blade Runner (1984), Kathryn Bigelow’s Strange Days (1997), the Wachowskis’ the Matrix trilogy (1999-2003), and the Japanese manga and anime series Ghost in the Shell (1989-). Cyberpunk has also been explored in comics and graphic novels, particularly in Warren Ellis’s Transmetropolitan (1998). Ellis aligns himself with transhumanism rather than posthumanism, but the concerns of cyberpunk in visual culture broadly echo those in literary cyberpunk. Once more the boundaries between human beings and technology are tested through the proliferation of prosthetics and the consciousness of machines.

Cyberpunk’s posthuman beings include Molly Millions from Neuromancer who has several prosthetics which allow her to be a top assassin. Johnny Mnemonic from Gibson’s short story of the same name (and Robert Longo’s 1995 film adaptation) has neural implants which allow him to store information. Neo (Keanu Reeves) in The Matrixbecomes more than human as he realises he has the power to manipulate the matrix. While such images encourage the viewer to question the limits of humanity the texts often cannot help but re-establish traditional boundaries and paradigms. Neo’s control of the matrix turns him into a god, as emphasised by the religious imagery of crucifixion and his name, which marks him as “The One”. This formulation places Neo above the intelligent machines who have come to rule the “real” world and the other human beings who remain oblivious to their condition, thereby reinstating an anthropocentric, Christian-humanist hierarchy.[4] Other posthuman images in cyberpunk reinforce humanism through policing the boundary between what can be considered conscious or human. Gibson’sNeuromancer manages to avoid this in its portrayal of artificial intelligence, but only by allowing the Neuromancer/Wintermute hybrid artificial intelligence to “transcend”, going beyond Earth’s communication systems in order to explore other galaxies. This means that, while the genre is certainly interested in posthuman beings, it often fails to represent them faithfully.

Cyberpunk continues to influence modern culture and many of its tropes have become part of the mainstream so that its boundaries as a genre are more difficult to recognise than they were when the literary movement was first identified. The last few years have seen the publication of Rewired: The Post-Cyberpunk Anthology which features writers such as Cory Doctorow and Greg Egan alongside writers who featured in Mirrorshades: The Cyberpunk Anthology.[5] Writers from the original movement in some cases continue to produce important work, such as William Gibson’s novel The Peripheral (2014) which incorporates cyberpunk concerns with the contemporary issues of remote warfare and climate change. The theme of posthumanism continues as deaths which occur in video games can be fatal in real life and human bodies are used as components in the American war machine. Pat Cadigan has also had recent success with “The Girl-Thing Who Went Out for Sushi” (2012) which won the 2013 Hugo and Locus awards for best novelette and features posthuman life forms, scientists who have had themselves changed into marine life, a process that invites non-binary thinking according to the story’s narrator.[6] The visual imagery of cyberpunk and its concerns about the line between the human and the machine continue to proliferate, particularly in visual culture through TV series such as Joss Whedon’s Dollhouse (2009-10), which shows the use of technology to wipe memories from human brains. These humans are known as “dolls” and implanted with memories appropriate to a number of situations (many of them sexual) required of them by wealthy clients. Echoes of the “meat puppets” described in Neuromancer – women with their senses and memories blocked while they work as prostitutes – are apparent. The influences of cyberpunk are perhaps now too widespread for the subgenre to be identified readily, especially in visual culture, but its contribution to posthumanism has been significant and is certainly worth remembering as part of any posthuman genealogy.

[1] Thomas Foster explores some of the ways in which cyberpunk engages with posthumanism in The Souls of Cyberfolk: Posthumanism as Vernacular Theory(Minneapolis: University of Minnesota Press, 2005).